Almost 4 months ago I bravely wrote with loads of anticipation what was to be the 2nd last blog in the “Building from a distance” series entitled “The Finish Line is in Sight”. How could I have been that naive to think that we would get to a state of project completion within a relatively short timeframe? Whilst the whole world reminds us daily that a building project is a protracted, frustrating, exhilarating and mentally deranging process, not even logic prevailed in trying to get past the “finishing touches”. In fairness to the builder, we are “almost” there, but it does seem at times that “almost” will remain just that, never quite complete but ever so close, a bit like about to bungee jump off a cliff but just not tipping off the edge. 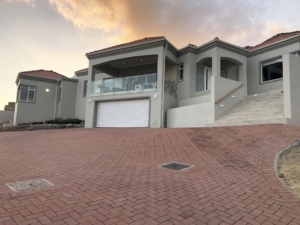 Looking back to the start of 2019, one cannot help but wonder if the Jinx Master did not have us targeted to be a classic example of not counting ones chickens before they hatch. Upon reflection it does seem as if the chickens hatched, took off in fright and returned as eggs waiting to tease us into submission for another round of confusing and repetitious work. The unfortunate part is that being an OCD profile with an eagle-eye that sees as little as a 1mm difference in anything, the contractors have had a tough time dancing around the ever growing snag list which grows at a much faster rate than it reduces.

As homeowners for the past 30 years, we were renting since our move to Hermanus and were violently nauseated by having to pay rent for any longer than we had to, we set a deadline (or more like it was set for us by our landlords) to move out of our rental at the end of January 2019. Realising that yet another move-in date deadline was to be passed, (first completion date was end November 2018, then end Jan 2019 which came and went) we had to make alternative arrangements for ourselves and the hounds. We gave the builder a target to have the garage completed and lockable in order to become a storage facility for our possessions, whilst we did another interim move for yet another 2 ½ months. All credit to the builder, come the 31st January 2019, the garage was ready and secure enough and within a few hours was chock-a-block to the brim with just about everything we owned.

A word of advice to anyone getting to the “perceived” end of a build – clear your diary of any superfluous plans and appointments because the amount of time you will need to spend in project managing the project manager and the “finishing” team as you go into what you thought was the final run, will somehow manage to fill your day beyond any realistic expectation you may have had. You will find yourself in that “decisions and choices” phase (revisiting the contents of a previous blog) when certain ideas turn out to be less than practical and a quick decision is required. And as much as I have harped on planning throughout this process, even the best plans gets thrown a curve-ball and with that your sense of humour and ability to control your emotions goes belly up and your desire to commit murder becomes as appealing as devouring a bag of koeksisters when on a sugar low.

In and amongst the normal building challenges, we experienced some events which most likely could’ve been avoided if all parties at play were in synch. A few of these became points of reference for the team of virtual psychiatrists (i.e. close friends who one could offload on when sanity seemed to have left the planet) when trying to understand our behaviour and frustration through the process. These are a few of the ones, aptly titled, where we believe the Jinx Master had come to roost:-

Deal done, deposit paid and the nightmare began almost instantaneously. The contractor vanished from sight having announced that he had taken a permanent position with a local company but was “committed to finish the contract”, leaving two labourers to dig the trenches. The entire job should’ve taken 2 days of labour. Suffice to say at this stage that after 8 working days, ½ the trenches not dug, reverse logic used to position sprayers, incorrect wiring installed for the controller, wrong pipe size used and a string of other incomprehensible actions. Two lone labourers who were more attached to their cell phones and irrational conversation between each other than the work at hand, disappeared from site never to be seen again.

Admittedly they were getting a lot of pressure as the landscaper was delayed by over a week and the “now-permanently-employed-contractor” was still sprouting forth with his commitment to finish the job. The skulduggery that followed is too insane to repeat at this stage as the matter has not been laid to rest. Suffice to say that the saviours of this shambles turned out to be a far more reputable company who rectified the mess within 48 hours and did the best they could with what they took over. They displayed a level of professionalism and co-operation seldom seen and that at a cost to themselves, for also having been dropped by the “now-permanently-employed-contractor”.

From then on  the red flags made daily appearances when the “resprayed” doors were re-installed looking worse than when they were first redone, some had marks, streaks or runs on them and a few had bumps in the doors themselves. Only the door and drawer fronts were re-done and not the sides or insides which were seemingly delegated to that group of crèche kids. The final crunch came when some of the doors that were meant to have glass panels were solid and some that were to have solid fronts had glass. The day of expunging the contractor through the proverbial door had arrived.

Further inspection highlighted that some of the drawers were opening unevenly to those next to them and there was enough sway in the drawers that the only way to stop it would be to put bricks in them. Turns out that different runners were used on different drawers and if ever there was a case of incompetence at its best, this was it. In fact, it’s a neck and neck race at the moment between the cupboard and irrigation contractors as to who wins the prize for the worst experience in the entire lifetime of a senior citizen with many building projects under the belt.

The positive outcome was that we found a secret and highly competent gem in this town that took what was an in-your-face disaster of grandiose proportions and did the best he could to turn it back into our dream kitchen. He subsequently was awarded the contract to build our lounge cabinets and shelving and the entire experience was so positive that it almost made up for the daily reminders of what could have been had he not stepped in.

Whilst I suspect this may not be the last in the “Building from a Distance” series, as we are still navigating our way through the snag list, I am a great believer in timeous acknowledgement of people or companies who have overstepped the finish line to provide a quality service no matter what the circumstances. As much as a side of me would like to name and shame the sometimes incomprehensible incompetence we endured from some of the contractors, I have no doubt that will come out on its own when Karma* decides the time is right.

* Karma – means action, work or deed; it also refers to the spiritual principle of cause and effect where intent and actions of an individual (cause) influence the future of that individual (effect).

If it wasn’t for the following contractors who truly went the extra mile, our sanity would not be just a bit tested but would most likely be a case for further study by the world’s most astute psychiatric professionals:-

Divvie van Deventer from Divvies Furniture, who took on the unenviable task of converting a patchwork shambles of a kitchen into something we can be proud of.

Andre Barnard from FloRite Irrigation who with rapid fire action turned a half-baked excuse of an installation into a fully working system.

Ivor Heneke from Walker Bay Paving whose team worked at breakneck speed to produce an impressive and professionally completed paving area and then returned with the same sense of urgency and pride to fix the damage caused by the soil delivery maverick.

A positive reputation helps grow a business
Scroll to top