In a prior blog in the “Building from a Distance” series I referred to “the mind-boggling realities of the ever-changing building process which continues to throw curveballs at you albeit generally not major ones”. Little did I know at the time the extent to which we would prove this to be true a number of times over. The highs and lows of this process can be somewhat tiresome and when you get to the end of the year with the builders vacation in sight, you can easily switch off to the challenges hoping they might just go away and leave you alone. And they do, albeit only for a few weeks during which time the euphoria of not having to make any decisions is experienced and enjoyed every day. 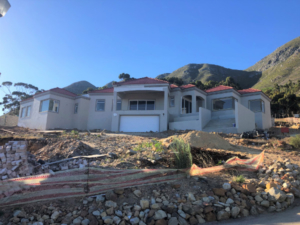 Reality, however, has a way of hitting you in the face like a bucket of iced water being dropped on your head and that is how the final stages of the build began at the beginning of the New Year. Having recovered from the major “surprise” of 2018, that being the equivalent of Trump’s Mexican Wall that we had to build at the back of our property, we pondered this 40m long and 3.6m (to be) high edifice and prayed for no more surprises of this magnitude. Our financial advisor was also found to be in a state of prayer and very relieved to hear that there were no more like that around the corner.

Our stated mission was to get the pressure taps opened full steam on the builders in order to meet various deadlines we were faced with. As we had to move out of our rental house by the end of January, the builders had exactly 2 weeks to finish our garage and make it lockable, as that was to become our storage chamber for all our possessions whilst we relocated to another temporary abode for the remainder of the build.

In the space of one week, we saw progress the likes of which we wished (unrealistically) was always prevalent. There were contractors over-foot, underfoot, on the roof, in the ceilings, tiling the floors, skimming the garage ceiling and beavering away like a bunch of frantic Guinea pigs at a wheel spinning festival. But hats off to them, by the time the removal truck arrived on site, they were ready for the onslaught of furniture and boxes that in no time filled the entire space with almost no room to breathe. When I finally locked that door, I had a sense that we were out of the starting block for that final marathon to the day when we wake up in the house for the first time.

The message in this diatribe is that no matter how well you plan things, at the final stages of a build you are having to hop, skip and jump to make even more decisions that you had thought you were done with. You need to be available at the drop of a hat else delays will creep in very quickly. It’s one thing saying “I like that range of light switches” and then you forget that you still need to decide on which type of switch in which location in which room.

In this technological day and age, you have to consider where you need traditional SA three prong electrical plugs vs two prong plugs, don’t forget the USB ports that you may want in select rooms, then you may want “switch-free” points which do not have a traditional on/off switch and when you plug in anything, it is on, and stays that way till you unplug it. And don’t expect your builder to give you at least a day or two’s notice. It’s more like a call that says “how many widgets of which size and colour do you want and we need to order them today”. Seriously? Not for the faint hearted or those like me who like to have everything planned and controlled according to my plans. It doesn’t work that way.

In the middle of switches, you get dragged into a “shower door” conversation only to realise as the discussion continues that the initial plan for which way the door will open won’t work. Why? Because there is a toilet in the way and I can see into the future where someone opens the shower door in haste and it shatters as it hits the loo. So what was initially intended as an “open outwards” door becomes an “open inwards” door. The message here is that you can plan for so many aspects but only when installations start happening do you see the impact of certain elements which no-one had thought of in the theoretical phases of the build.

Probably the most challenging part of the final stages is to avoid upsetting the applecart by pointing out snags before you are even close to moving in. Builders have a process they follow which in a layman’s eyes sometimes does not make a whole lot of sense but when you see it roll out then you get the picture. By all means, build your snag list as you see things which you are not happy with but choose your timing to highlight them if you want to avoid the “glare and stare from hell” from the project manager. Of course, if you have invested time in building the right relationship with the building team (which is very advisable) then you can always take a stab at testing the snag waters without upsetting too many people.

When I say the finish line is in sight, that’s only the end of the beginning, as the final stage of turning a construction site into a home with a garden has yet to begin. As with the build, it has to be planned and that is something which you cannot do until all the levels are defined. One thing we have learned through this process is to spend loads of time thinking about the end result, imagining it, researching your options and before you know it your next project will have come to life. For now, we buckle down and head towards that finish line.